I was never a Deadhead but the MBA in me perked up at this article's title in The Atlantic. Not one to tinker with perfection, I kept it for this blog post.

Management Secrets of the Grateful Dead 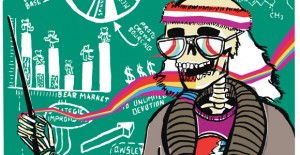 I was never a Deadhead but the MBA in me perked up at this article’s title in The Atlantic. Not one to tinker with perfection, I kept it for this blog post.

The Dead incorporated and pulled board members  from the band, its road crew and other members of their organization. They rotated the CEO position.

The ran a profitable merchandising division and “peace and love notwithstanding did not hesitate to sue those who violated their copyrights.”

They made the strategic decision to let fans tape their shows, which on one hand gave away recording revenues, but on the other, widened their audience. They figured (rightly) that “a ban would be unenforceable, and anyone inclined to tape a show would probably spend money elsewhere, such as on merchandise or tickets.”

A management professor quoted in the story called the Dead’s approach “strategic improvisation,” and observed that people are eager to attend his lectures on the band. “People are just so tired of hearing about GE and Southwest Airlines.”

It’s one of the most profitable bands of all time.

What people today are beginning to realize is what became obvious to us back then — the important correlation is the one between familiarity and value, not scarcity and value…if I give my song away to 20 people, and they give it to 20 people, pretty soon everybody knows me, and my value as a creator is dramatically enhanced.

So perhaps it’s karma, not just deliciousness, that made Wavy Gravy and Cherry Garcia bestsellers for Ben & Jerry’s?

From Charlotte, NC, Tamela writes books, articles, speeches and presentations for business professionals. From "the road" she writes about the people, places and experiences she discovers and the life lessons she learns from them. Invite her to share some of her lessons from the road at your next event!
Previous Home Office Design Tips — From a Financial Advisor?
Next March Book Lust