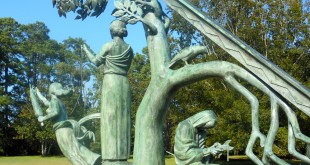 No, the Birthday Fairy didn’t bring me a Nook last month, but now I wonder if I should hold out for an iPad. Your suggestions?

BUT WAIT! This just in! Apparently I’m not the only one who didn’t know you could download the Kindle software to a PC and start reading. Hmmm…anyone tried this? Please comment.

Speaking of reading technology, Duke Magazine featured a recap of a panel discussion on the future of reading “The End of Civilization as We Know It? The  central question was technology’s impact on how, what, and why we read. I particularly enjoyed the back & forth on Google’s Booksearch and this quote from Andy Berndt ’89, managing director of the Creative Lab at Google, “But we’re not interested at all in replacing books. A lot of people who talk about this haven’t even ever used Book Search. The hope is that if you can search for something about a topic, and you can find a book, even a snippet of a book, that exists somewhere else, you might continue to pursue that interest. If you can’t, you might not. And that seems hugely important.”

You Are Not A Gadget: A Manifesto 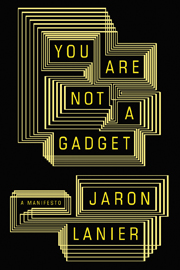 Amazon choose this as one of January’s best books, saying, “For the most part, Web 2.0–Internet technologies that encourage interactivity, customization, and participation–is hailed as an emerging Golden Age of information sharing and collaborative achievement, the strength of democratized wisdom. Jaron Lanier isn’t buying it. In You Are Not a Gadget, the longtime tech guru/visionary/dreadlocked genius (and progenitor of virtual reality) argues the opposite: that unfettered–and anonymous–ability to comment results in cynical mob behavior, the shouting-down of reasoned argument, and the devaluation of individual accomplishment. Lanier traces the roots of today’s Web 2.0 philosophies and architectures (e.g. he posits that Web anonymity is the result of ’60s paranoia), persuasively documents their shortcomings, and provides alternate paths to “locked-in” paradigms. Though its strongly-stated opinions run against the bias of popular assumptions, You Are Not a Gadget is a manifesto, not a screed; Lanier seeks a useful, respectful dialogue about how we can shape technology to fit culture’s needs, rather than the way technology currently shapes us.”

Q: As one of the first visionaries in Silicon Valley, you saw the initial promise the internet held. Two decades later, how has the internet transformed our lives for the better?

A: The answer is different in different parts of the world. In the industrialized world, the rise of the Web has happily demonstrated that vast numbers of people are interested in being expressive to each other and the world at large. This is something that I and my colleagues used to boldly predict, but we were often shouted down, as the mainstream opinion during the age of television’s dominance was that people were mostly passive consumers who could not be expected to express themselves. In the developing world, the Internet, along with mobile phones, has had an even more dramatic effect, empowering vast classes of people in new ways by allowing them to coordinate with each other. That has been a very good thing for the most part, though it has also enabled militants and other bad actors.

Q: Most authors have never made a living from selling their books. They’ve always had to teach or do something else on the side.

A: Sure, that’s also been true in music. But both music and publishing have always supported the creative middle class. So we’re speaking now at the Random House offices in New York. There’s a floor full of people here who are earning salaries and supporting families, who are not hit authors but are editors and publicists and all sorts of things, and they’re immensely valuable. This new world that many like Chris propose disenfranchises them completely.

In an earlier draft of the book I actually went through research on exactly what’s happened to the middle class in music, so if you go back to the start of the Web, there were hundreds of thousands of people filing taxes as musicians, only a tiny portion of whom did so on the basis of being known. But there were so many little jobs—session musicians, sound technicians—and that just fell off a cliff. I assert, and I think with good reason, that had we not screwed up in this way, we would not have had the recession. We have to be looking at results, and if the Internet was so great for wealth, then we should be getting wealthy. It has to be stated that simply.

IOU: Why Everyone Owes Everyone and No One Can Pay 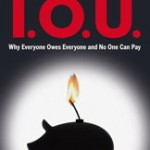 I, like many, am suffering from meltdown forensics fatigue. But this book got my attention when I heard the author interviewed on NPR’s Marketplace.

Here’s an excerpt from NYT Review: Mr. Lanchester, who is British, isn’t an economist or a business journalist. He’s a novelist (and a talented one; try “The Debt to Pleasure”), a man with no special financial expertise whatsoever. A few years ago he began following the financial meltdown for research purposes, as background for a novel he was writing. He soon realized, he says, “that I had stumbled across the most interesting story I’ve ever found.”

Once upon a time in America and Britain, he observes, “the jet engine of capitalism was harnessed to the ox cart of social justice, to much bleating from the advocates of pure capitalism, but with the effect that the Western liberal democracies became the most admired societies that the world had ever seen.”

Then the Wall crumbled, and “the jet engine was unhooked from the ox cart and allowed to roar off at its own speed. The result was an unprecedented boom, which had two big things wrong with it: It wasn’t fair, and it wasn’t sustainable.”

“I.O.U.” crosses over into black satire when Mr. Lanchester describes how bankers used their new tools to make money from poor people, the worst credit risks, by prying their cash loose through predatory lending, then pooling this money and selling it off. Who cared if these people defaulted on their mortgages? The risk had already been passed along to others, and ultimately, when banks failed, to taxpayers. Mr. Lanchester calls this “a 100 percent pure form of socialism for the rich.”

With steam shooting from his ears, he summarizes: “So a huge, unregulated boom in which almost all the upside went directly into private hands, followed by a gigantic bust in which the losses were socialized. That is literally nobody’s idea of how the world is supposed to work.”

Mr. Lanchester’s history lesson is peppered with dead-on references to everything, including “Annie Hall,” “The Simpsons,” “The Wire,” Hemingway and Jacques Derrida. He is effortlessly epigrammatical. (“In a sense, credit isn’t just an aspect of the economy, it is the economy.”)

Before you begin to cry, pick up a copy of “I.O.U.” Good humor and good company will be the things that’ll get us through.

Exploiting Chaos: 150 Ways to Spark Innovation During Times of Change 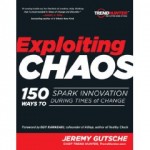 I’m writing a business book for a general audience, and read this one because I find the visual approach so refreshing. I want to emulate the approach in my work.

This video will do a better job of explaining it than a written review:

The Relentless Revolution: A History of Capitalism 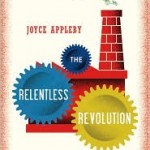 I excerpted from the NYT Sunday Book Review:

Appleby, a distinguished historian who has dedicated her career to studying the origins of capitalism in the Anglo-American world, here broadens her scope to take in the global history of capitalism in all its creative — and destructive — glory.

In viewing capitalism as an extension of a culture unique to a particular time and place, Appleby is understandably contemptuous of those who posit, in the spirit of Adam Smith, that capitalism was a natural outgrowth of human nature. She is equally scornful of those who believe that its emergence was in any way inevitable or inexorable.

Appleby believes that intimations of capitalism’s rise first surfaced in the Netherlands, where an otherwise unremarkable country with few resources of its own managed to catapult itself to wealth and prominence in the space of a century. While Appleby lingers on the Dutch — and even manages to make things like the herring trade sound interesting — her principal subject is Britain, which she considers the true cradle of capitalism.

Her focus on Britain has little to do with William Blake’s “dark satanic mills” and other symbols of the Industrial Revolution. Instead, Appleby sees in mundane changes in agriculture the beginnings of later, more dramatic, developments. In 16th-century Europe, she observes, about 80 percent of the population was engaged in agriculture — roughly the same proportion as at the time of the Roman Empire. By 1800, the British farming population had dropped by more than half, thanks to innovations that produced a new, commercial agriculture, like crop rotation and the private enclosure of public lands. These efficiencies created a huge pool of surplus labor, setting the stage for the more visible British capitalism in the coming centuries.

It is to Appleby’s credit that she spends time on a subject like this, which is too often slighted in popular histories. In a similar spirit, she captures how a new generation of now forgotten economic writers active long before Adam Smith built a case “that the elements in any economy were negotiable and fluid, the exact opposite of the stasis so long desired.” This was a revolution of the mind, not machines, and it ushered in profound changes in how people viewed everything from usury to joint stock companies. As she bluntly concludes, “there can be no capitalism . . . without a culture of capitalism.”

The Hidden Brain: How Our Unconscious Minds Elect Presidents, Control Markets, Wage Wars, and Save Our Lives by Shankar Vedantam, a science writer for The Washington Post and a Nieman Fellow at Harvard University. 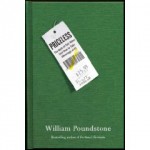 Priceless: The Myth of Fair Value (and How to Take Advantage of It) by William Poundstone dives into the latest psychological findings to investigate how and why prices are allocated.

Next month brings several reader reviews. Please let me know if you’re reading anything interesting that you’d recommend or want to review for an upcoming Book Lust post.

From Charlotte, NC, Tamela writes books, articles, speeches and presentations for business professionals. From "the road" she writes about the people, places and experiences she discovers and the life lessons she learns from them. Invite her to share some of her lessons from the road at your next event!
Previous Oriental Rugs & Business Writing
Next Gotta Love footnoted.org