Day Two finds us north of The Eternal City, in the medieval burgh of Ronciglione, now home to fewer than 9,000 people. Our guide Enrico tells us we have 45 minutes to grab a cuppa, answer nature’s call, and explore the town.

The village elders sitting on a bench by the row where we park our bikes smile broadly, their work-hardened hands gesticulating as they gossip amongst themselves, perhaps at our expense.

I jump off the bike, grab my camera, and head into the heart of village life. Since it’s a Saturday morning, things are hopping. Little girls push their pink bicycles up the steep alleyways toward the piazza. Women hanging their wash on lines strung below their windows greet the girls from their apartments above.

I had a momentary flashback to my own childhood, before hypervigilant parenting became the norm. After chores were finished we were told to “go outside and play.” Wherever we got hungry we would go to the closest home for lunch or a snack, then be told the same thing, “go outside and play.” It pleases me to see these kids enjoying a free-range childhood. 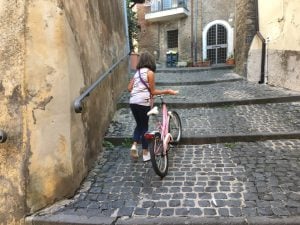 It’s an agricultural community, producing nuts—think “Nutella”—chestnuts, and wine. The steep alleyways make me wish I could see the town in a thunderstorm; where would all that water flow?

Seeing a VENDI sign (“For Sale”) on a arched wooden door of an apartment I find myself thinking, “I could totally live here,” with no pre-cognition that I will say that to myself at least once in each coming day.

Reaching the piazza with its lovely fountain in the traffic circle, I spy my traveling companions Jo and Dan coming out of the cathedral before promptly getting lost in the rabbit warren of streets.

By the time I get back to the rest of my group I am 20 minutes past our allotted visiting time. I think to myself, nuts, I’m now officially “that person.” Luckily no one seems to mind. They’re as intoxicated by Ronciglione’s charms as I.

Mounting back up, we ride the splendid coastline road that runs along the shores of Lake Bolsena, a volcanic crater lake reportedly over 370,000 years old. We stop for lunch in the village of Bolsena for a bite to eat.

Enrico designed the itinerary not to make road warriors of us, but to balance our love of motorcycling with a deep cultural immersion in his native land. This includes lots of stops in small villages and Enrico’s help navigating the shops.

We stroll the vias (narrow roads) looking at shops and crowd lines for the various eateries when Enrico spies what we would call a green grocer. He says with urgency, “Tamela, let’s go find some broccoletti.” 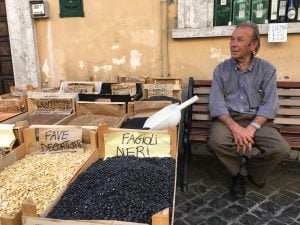 Broccoletti has been a point of dispute and discussion between the two of us since my first dinner in Rome. The night before our tour began, I ate a skillet dish of beef and vegetables, including what the waiter claimed was broccoletti. Thinking perhaps the waiter and I had a misunderstanding I asked Enrico about it—did Americans and Italians use the same word for different plants?

“No,” he said. “Broccoletti is broccoletti,” but I persisted that we were talking about different things. The dish I had enjoyed—to the point of asking for a second helping—had none of the tiny buds atop skinny stalks; it was more like what Southerners call “greens.” 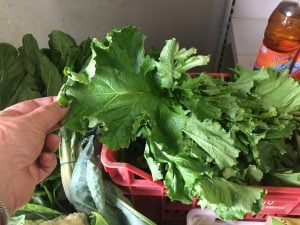 In the doorway of La Boutique della Frutta Enrico begins scanning the baskets of produce to the right. Holding up a bunch of greens he smiles. “This, Tamela, is the broccoletti, no?” And sure enough. He’s right.

We’re both right.There are only greens, no stems or buds. In Italy broccoletti can be served without the scrawny stalks as a delicious green. Case closed.

After lunch we cross into the region of Tuscany en route to Siena. At our stop in Bagno Vignoni, famous for its thermal water and spa treatments, families mix with tourists on the park grounds.

I smile at a long row of Vespa scooters available for rent. Scooters are cute, but I like being on a motorcycle, so I can throttle through the twisty climbs of Siena’s hilly landscapes. The riding is spectacular: well-maintained roads are always sweeping this way and that, with ancient vineyards and castles dotting the landscape. As I mentioned in this post, the Italians respect motorcyclists, so despite being on unfamiliar terrain I don’t have to worry about Italian road rage.

We end the day at a luscious agriturismo B&B on an olive farm overlooking Siena’s skyline, where the sun is sinking fast, casting a yellow haze above the red-brown clay of the walled city.

I’ll tell you more stories from Italy this year, since I’m returning to ride my motorcycle through Tuscany, Corsica, and Sardinia in 2017. Subscribe in the purple button below and you’ll never miss an installment of the story. To start this series at the beginning, go here.

Author Tamela has extensively traveled the U.S. and Canada, delivering her message to Pack Light | Travel Slow | Connect Deep. Her keynotes and workshops include life lessons she has learned through chance encounters on the road.
Previous Appalachian Roots Music: What’s with the Banjo?
Next Appalachian Music Trails: Destinations in the Blue Ridge Mountains