in Italy by Motorcycle 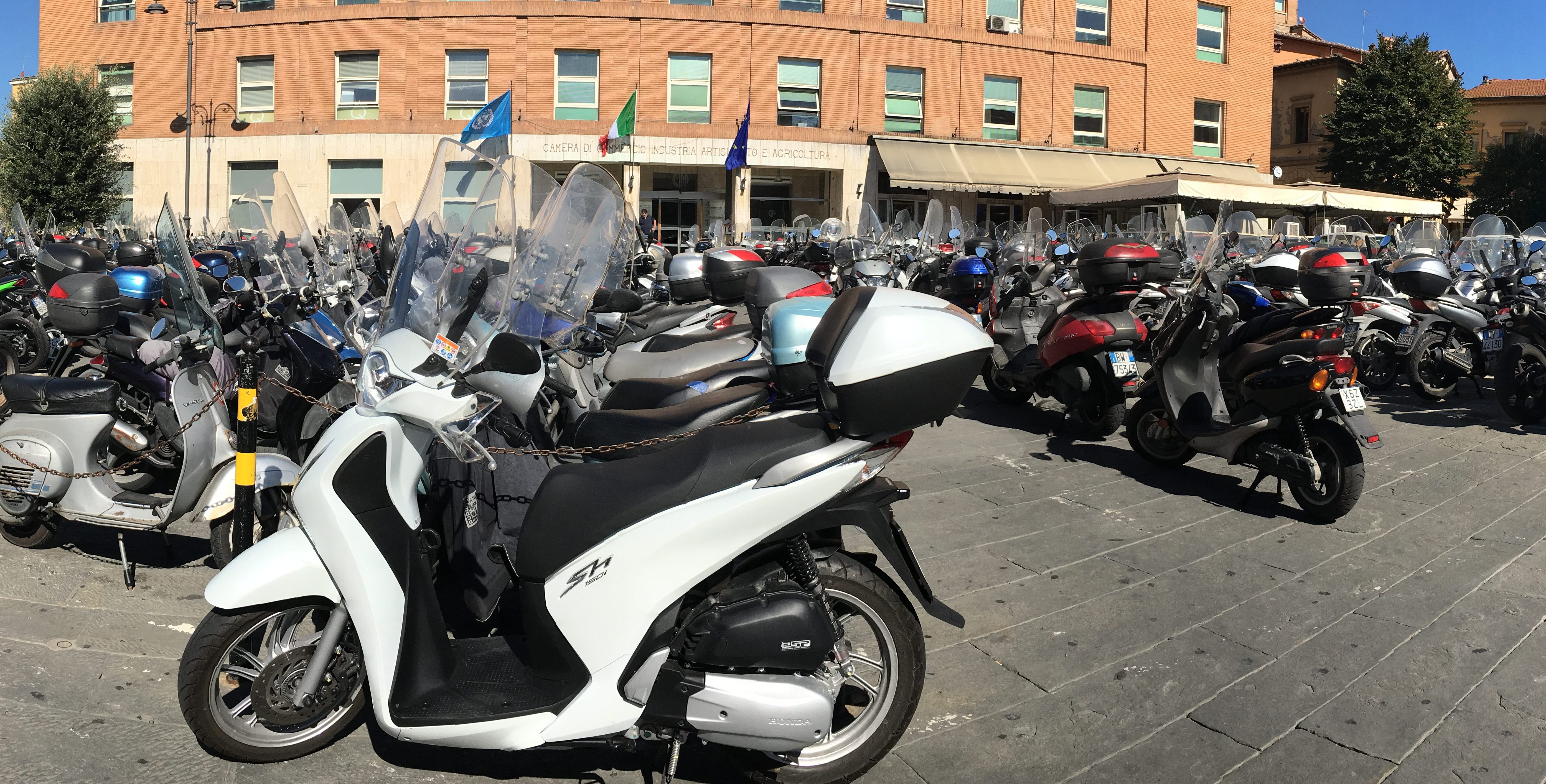 I’ve been chasing an Italian man riding a BMW GS Wasserboxer  motorcycle for the last six days through Lazio, Tuscany, and Umbria. Tomorrow we’ll be back to Rome, where the entire adventure began.

My husband fully approves. We have an understanding.

Rome traffic and the social contract 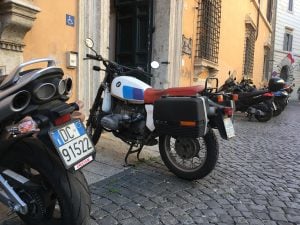 Motorcycles are everywhere in Rome

On the first day of my riding adventure, Wasserboxer Man wants me to learn Italian traffic conventions. I follow his lead through Rome’s notorious traffic, shooting through gaps so narrow that I tilt my handlebars to avoid the mirrors of the vehicles on either side of me. Maybe that’s unnecessary, but I feel more confident doing it. Eventually I learn not to overthink it.

When we come to a stoplight, we navigate to the front of the line of vehicles. Nobody cares, in fact they have left room for us. Moving to the shoulder, I stand on the pegs to make riding over tree roots beneath the pavement more comfortable. No reaction from the drivers I pass.

I’m having my way with this traffic—splitting to the right and left of cars—with impunity. When you split a lane into oncoming traffic, drivers don’t rush toward the center line in a game of “chicken” designed to put you in your place—instead, they edge over to the shoulder a bit so you can make an efficient pass. Mutual respect is a beautiful thing in society. 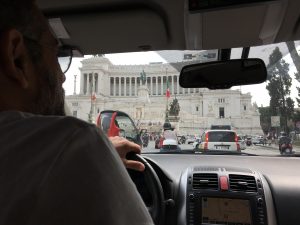 Traffic from inside a Rome cab

Astride my rented G650 GS I learn that traffic in Rome is less governed by laws, lanes, and speed limits than by an implicit social contract that values efficiency above all else. Yep, I just used the words “Italian” and “efficiency” in the same sentence with no implied irony.

Let’s all get where we need to go efficiently seems to be the guiding principle when driving in Italy. Italian motorists respect motorcyclists. They know that allowing scooters and motorcycles to the front of the line at traffic lights is efficient. Nobody opens a car door to see if they can take you out—that would be highly inefficient and disrespectful.

Yes, Rome traffic is hectic, yet manageable. I did it, so you can too.

By the time we reach Rome’s beach, Ostia Lido, I’m exhilarated. Heading to the water’s edge in my motorcycle pants and boots, I collect seashells from the Tyrrhenian Sea as a trophy of my accomplishment.

Wasserboxer Man has other concerns right now, namely the other people in his care. He is Enrico Grassi, owner of Hear The Road Motorcycle Tours Italy and host to a group of Americans on his  “Ladies First” tour. We’re from Pennsylvania, Louisiana, Missouri, California, Texas, and North Carolina (me), and not all women—Dan and Derek accompany their mates. 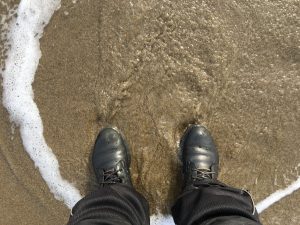 Tamela’s boots in the Tyrrhenian Sea

You can never know how a group ride is going to work; after all, one bad rider or bad attitude can turn the experience into a living hell. That’s one thing back home, but in a foreign country you’re not going to peel away from a tour with a breezy arrivederci. My friend Bill Kniegge of Blue Strada Tours convinced me I should give it a try and put me in touch with Enrico.

My concerns are allayed after our warm-up ride to the Tyrrhenian Sea. Riding BMW, Moto Guzzi and Harley-Davidson bikes, we sorted ourselves into a riding order that held naturally for the remainder of the tour. I would know Christin’s Moto Guzzi V7 headlight anywhere after watching for it in my mirrors for six days in formation.

Off the bikes, into the bread

Off the bikes we laugh and tease each other like old friends. The couple from Pennsylvania, Jo and Dan, share stories of her father, Giovanni, whom they agree that Enrico reminds them of. Both Giovanni and Enrico are Roman, and hold staunch views that there are certain foods to eat and certain ways to eat them.

Enrico will indoctrinate us in Italian gastronomy with each meal: how the animal is raised and butchered; when the plant is harvested; how to keep pasta from sticking; and the fact that pork jowl (guanciale) not only tastes better than pancetta, which comes from its belly, it is the only pork allowed in amatriciana (a staple pasta dish that also includes pecorino cheese, white wine, tomatoes from San Marzano, pepper and chili). 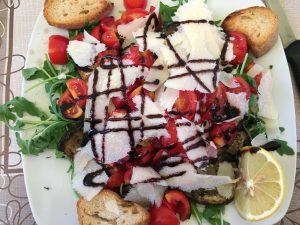 Bread becomes an ongoing joke among us, especially between Enrico and Dan—the bread lover in our group. “Don’t touch the bread!” Enrico says each time it’s brought to the table. “Eat first, then use the bread to soak up the sauce.”

Jo and Dan exchange knowing looks, because Enrico’s admonition recalls a memory from when they were dating some 40 years ago and Dan was invited to family meals. He always wanted butter on his bread but Giovanni wouldn’t stand for it. Eventually Jo’s mother would take pity and bring him some, inviting her husband’s scorn. Another transgression of young Dan’s was asking for garlic bread with spaghetti, an American tradition, only to learn that this made him a Philistine in Giovanni’s eyes. It’s a wonder they got permission to marry!

As the tour proceeds and more stories of Giovanni are revealed, we all begin to think of him as the tenth person at the table. This right here is group touring at its best. I count my blessings. The video at the top of this post was a Facebook Live broadcast we took after returning to our hotel in Rome.

I’ll tell you more stories from Italy this year, since I’m returning to ride my motorcycle through Tuscany, Corsica, and Sardinia in 2018. Subscribe in the purple button below and you’ll never miss an installment of the story. Here is Day Two of the tour.