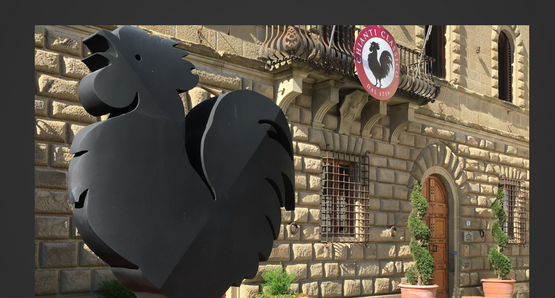 The "gallo nero" (black cockerel) is everywhere in the Chianti region. This one is in the Piazza Matteotti.

Italy by Motorcycle: Negotiating with a Greve in Chianti Shopkeeper

After leaving San Gimignano we head to Greve in Chianti, the birthplace of Giovanni da Verrazzano. He is famous for being the first  European to explore the Atlantic coast of North America between Florida and Newfoundland, and for discovering the New York Bay in 1524. This discovery is why the bridge spanning the Narrows between Brooklyn and Staten Island bears his name.

While Christopher Columbus looms large in the pantheon of New World Italian explorers, Verrazzano was no slouch. Verrazzano made two additional voyages to the New World, making his way as far south as Brazil in one voyage. On his third, he met his death in the Caribbean at the hands of cannibals.

Our guide Enrico takes nationalistic pride in Verrazzano, and Italian-American Jo is the only one in our tour group who answered the quiz question about him correctly at dinner the night before. Her father Giovanni would be proud of his girl.

Arriving that sunny afternoon, we are in luck—Greve in Chianti is hosting an open-air pottery festival. After parking the bikes we head toward the Piazza Matteotti.

In the via I spy a yarn shop and tell the others to go ahead, and not to wait for me. I’ve been waiting for this moment for some months, not knowing when it would arrive. I will buy yarn that I can take home to knit into my own souvenir.

Inside the little shop are all manner of knitted and crocheted hats, scarves, shawls and ponchos. The bespectacled shopkeeper smiles broadly and says, “Buongiorno,” in greeting. I see some bulk yarn in blue, black and tan colorways wrapped around spools and tucked under a bench. This lack of prominence tells me that she doesn’t sell a lot of yarn, rather, that she specializes in the garments themselves.

When I think about how I will ask if the bulk yarn is for sale, I quickly realize that my language skills are inadequate. She is equally stumped in English, which I find unusual for polyglot Italian merchants.

Google Translate app to the rescue

Whipping out my phone I hold up a finger to this woman in the universal gesture of “hold on a moment,” and fire up the Google Translate app on my phone. We are able to communicate fairly well by typing phrases into the app, making exaggerated hand gestures and smiling a lot.

We DO have one language in common: wool.

It occurs to me at one point that she thinks I want to buy some yarn so that SHE can make it into something FOR me. We eventually work that out and then we come to price. She is accustomed to selling the yarn by weight but I want the entire blue spool.

After Google Translate helps us understand each other on that point, I ask how many euros, and think I hear her say, “fifty.” I’m willing to pay fifty euros because the yarn is of great quality and there’s plenty of it. To my surprise, she holds up two five-euro notes to illustrate her point and I’m delighted to save forty euros on the transaction!

We get a selfie together and I am on my way, feeling pretty resourceful. I mentally pat myself on the back and then find my friends in the piazza to tell them what I just accomplished.

Black roosters are not only prominent in the piazza, they are everywhere in the Chianti region.The profile was the emblem of the historic Chianti League, which ruled the region from the beginning of the 14th century.

The Gallo Nero (“black rooster” or “black cockerel”) is the registered trademark of the “Consorzio del Vino Chianti Classico Gallo Nero” a trade organization that guarantees a bottle of real Chianti wine. Enrico has arranged a wine tasting for those in our group who are interested, so after a sojourn in Greve in Chianti, we make our way back to Podere la Strega, our luxurious agriturismo.

A Stroll in the Olive Groves

While the wine tasting is in progress at Podere la Strega I tell the group I’m going for a stroll in the olive groves and will be back in time for dinner. Denean from Louisiana asks to go with me, “I’ve had enough to drink,” she confides.

As we make our way down the gravel path between the groves toward a horse pasture at the bottom of the hill, she tells me this is the best week in her entire life. So far it’s been a difficult year; her husband’s death being the toughest of many trials. Back home, her father had a spinal tap today in hopes of a diagnosis that has eluded doctors for several months. She and her mom and daughter have been running the family business during his illness.

She says she wants to bring her mother to Italy to slow down and smell the roses as the Italians know how to do. Maybe she’d even like to move here permanently. “I don’t need half the stuff I own,” she says, echoing my own thoughts, “What I need is time with the people I love, good food, and less pressure.”

My mind goes back to the VENDI sign in Ronciglione and I imagine life in the slow lane with a sigh.

Although there are fabulously wealthy people in every country, including Italy, it strikes me that the everyday folks whose villages we glide through and visit are rich in their culture and each other, more than their material possessions. I don’t want to romanticize this, but I must give it its due.

Their wash hangs out on clotheslines and is draped over balconies not simply to save electricity, also because their homes aren’t big enough for laundry rooms— and in some cases, even washing machines. I don’t think this is cause for misery.

There is a lavanderia a gettoni (laundromat) in every village that I wouldn’t hesitate to use if I lived there. No doubt this shared resource is part of the social glue of community life, where people can gossip, laugh, and commiserate about life’s vicissitudes.

As the dusk intensifies Denean thanks me for switching bikes with her in Rome. She loves her rented Moto Guzzi. I had intended to ride that bike for the novelty of riding an Italian bike in Italy (“when in Rome, do as the Romans do”). She contracted to ride the BMW G 650GS, and when she got her first look at the bike, I saw revulsion in her eyes.

Let’s face it, GSes are the mule of the motorcycle world: ugly to look at while extremely effective at what they do. Denean simply couldn’t see herself on that bike. The Guzzi was similar to the Harley-Davidson Sportster she rides at home and her heart was set on it.

Just to see what I had missed, I took the Guzzi for a spin at one point during the tour, and the GS definitely corners better. Its upright ergonomics didn’t make my back ache by day’s end as the Guzzi’s would have done.

I switched to help her, and the karma played out to our mutual favor. Life is good.

Here is the beginning of the series. The next story will be about “art overindulgence” in Siena.