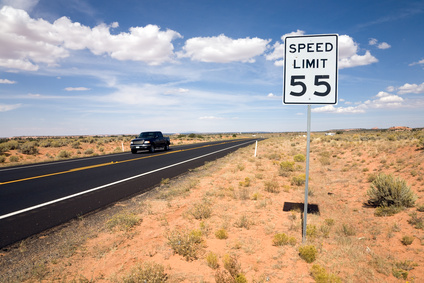 Runnin’ Shotgun with Dad and a CB Radio

Parents today prepare for road trips by stocking up on DVDs and iPad games. They’ve got nothing on my parents, who traveled with three kids from our home in Ohio to visit family in southern California…

What was their secret for success? A CB radio. 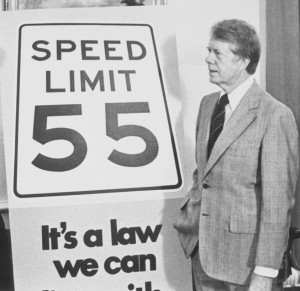 Citizen Band radio (CB radio)  required special equipment but not an operator’s license. This meant you could send out a broadcast like a licensed radio station if you had the right equipment and used one of 40 open channels.

People used it like today’s social media—you could follow public conversations in real time without saying a word. Social media users call this “following the stream” or “lurking.”

CB radio had been used by truckers for years but it became popular with the general public as the means to subvert the 1974 national speed limit  of 55 m.p.h. The state highway patrol departments became major revenue sources and aggressively pursued speeders.

Truckers’ wallets were jeopardized by the law while everyone else was merely inconvenienced, but the law was universally despised and flouted by those with CB radios, who could report law enforcement through the airwaves.

In 1975 the wildly-popular song, Convoy, hit the airwaves. It told of a fictitious band of 18-wheelers that blockaded highway lanes and refused to stop for any reason—including law enforcement—as it traveled west to east, picking up converts and reinforcements along the way.

Real-life trucker convoys and strikes were real, but not as flamboyant as the song portrayed them to be.

You couldn’t go an hour between plays on every country or pop music station on your AM/FM dial. The song became a movie in 1978 and taught us all CB jargon like “10-4 good buddy” and “put the pedal to the metal.” That’s how CB talk became common parlance.

You’d even hear people in grocery stores and PTA meetings saying “10-4” instead of “okay.”

Fascinated by this history? Mortal Journey offers an extensive list of jargon and a history of the CB radio.

Choosing our “CB handles” before hitting the road

My family went all-in on CB radio culture. We had a base camp unit at home that resembled the one in the picture (left).

In preparation for our bi-annual road trip, Dad also installed a mobile CB unit in the wagon and everyone in the family chose their “handles,” which was sort of like choosing your Twitter name (I’m @TamelaRich there).

I was “Buckskin,” a horse color. Dad was “Stage Coach,” and Mom was “Running Deer.” Since I was the eldest child—and a teenager —I didn’t give a hoot what my younger siblings’ handles were.

The CB was a precursor to the cell phone. We could use the base camp to hail Dad on the CB Radio in the Vista Cruiser and tell him to stop at the store for a missing dinner ingredient. For sport he’d say “Stage Coach here. I’ll put the ‘pedal to the metal’ and be home in five minutes.”

Ohio to California with the truckers on CB

Now, back to the promised story about our legendary Ohio-to-California road trip.

Traveling along I-40 and parts of the old Route 66 we faced a couple of days in the scalding desert both going to and coming from California. At midsummer, those days were brutal in a car with vinyl seats and an underpowered air conditioner.

On that note, some highway departments filled roadside barrels with water that drivers could use to keep their radiators from overheating. Please don’t tell me I sound elderly with this recollection.

Mom and Dad had a great system for getting through this portion of the trip. Mom drove the day shift and Dad drove at night. This brought the added advantage of skipping the cost of a motel—take note, minivan parents! 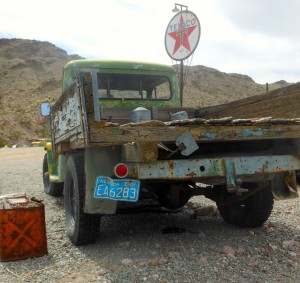 As a night owl myself, my job was to keep the conversation with Dad going in order to keep him awake. In CB jargon, I was “runnin’ shotgun.”

I thought it was great fun spotting patrol cars (code name, “Smoky the Bear” or “Smoky” or “bear”) and reporting them on Channel 19. Dad had the eagle eye for Smokies, but he let me make the reports. There weren’t as many bears to spot at night, which was why I was tasked with talking to Dad.

With my little feet propped up on the dashboard, the air conditioner passing air up my shorts with the force of a baby’s breath, Dad and I talked about the meaning of life through the wee hours. To this day we are amateur philosophers.

Lots of the truck drivers we eavesdropped and conversed with had philosophical streaks, too. We heard misgivings about the nature of their work: providing for their families too often conflicted with important family events.

Yes, even a tattooed, chain-smoking trucker with Yosemite Sam mud flaps (“Back Off”) will choke up when he tells you the story of missing his daughter’s ninth birthday party.

I still talk to truck drivers, but not on CB. I like asking them at a diner or truck stop about the things they’ve seen and the sights I should be sure to see myself. They lead interesting lives, for sure.

How to report a bear sighting

A CB operator with something important like a bear  sighting (law enforcement varietal) to report would start the conversation with “Breaker, 1-9” which was the way to “break” into the ongoing conversation one channel 1-9 (nobody ever said “nineteen”).

CB operators would immediately conform to the speed limit, and leave the others to be swept up in the speed traps. I thought it was cool that I could change interstate behavior with one report. The power of broadcasting!

I didn’t always understand the CB conversations—again, like the Twitter feed, they moved quickly, and I was only about 13—so Dad often fed me my lines.

He made me sound grown up and well-informed so I didn’t realize at the time that my high-pitched voice gave my age away. I thought the truckers mistook me for an adult, which of course was my life’s ambition.

The grizzled road warriors often chuckled at my witticisms, but if they stepped out of line, Stage Coach would take the handset and put them in their place.

One morning, when Dad was at the end of his night shift, I was dozing in the front seat and everyone else was waking up in the back seats. Dad picked up the CB handset and said “Breaker 1-9, this is Stage Coach. I just passed a bear in the median at mile marker (X).”

And the next sound we heard was a great baritone, “Stage Coach, this is Smoky the Bear. Pull that Vista Cruiser over to the shoulder. We’re gonna have a conversation.” Blue lights lit up in the back window and we children were terrified. We’d never had a run-in with the law!

We  all love that memory! I lovingly compare that road trip to National Lampoon’s Summer Vacation . Dad wasn’t Clark Griswold—he wasn’t as goofy—but he was just as lovable and open to life’s adventures.

About that conversation, the officer reminded my dad that their work included a lot more serious offenses than speeding truck drivers. They apprehended drug dealers, kidnappers and escaped felons. When we reported them on the public airwaves, we might be impeding crime busting. He let Stage Coach go with that admonition.

Advice for a 2014 road trip with kids

Okay, so why did I tell you this story? It’s the perfect illustration for why parents who want a memorable vacation should actively involve their kids in its planning AND during the road trip itself.

Wait a minute, you’re planning on flying to your destination? Think again!

I remember a few other vignettes from the trip; eating at The Big Texan where I bought a hair ornament decorated with little pistols, meeting my California cousins, and watching nuns play jump rope on the beach with a rope made of sea kelp. Yet nothing makes me smile more the memory of being right in the thick of it with Dad in the middle of the night, sighting bears and reporting them to the truckers.

My advice for involving the kids? Give an older child an entire travel day of the vacation to plan the roadside stops or a destination city to research and make recommendations to the rest of the family. I like the Roadside America and Roadside Presidents and History Here apps for finding unusual sights and historical markers.

A younger child can choose a restaurant from the billboard signs along the way or can choose where to eat a picnic lunch. You can say to the child, “We’re going to stop in Berkeley Springs West Virginia for a picnic lunch. Would you like to eat at a pull-off where you can see three states (Pennsylvania, Maryland and West Virginia), or at this state park where President George Washington took a bath?” Giving kids two choices that you can live with makes everyone happy.

Okay, now back to you. What was YOUR MOST MEMORABLE ROAD TRIP? A friend in college told me about a trip where one of her brothers got car sick and her dad had to pull over and let everyone puke their guts out (puking is usually contagious, even if what caused it isn’t). As I type these words I’m snorting with laughter!

Send me a picture and story from your favorite road trip and I’ll make a collage with your stories! The best story can write a guest post here on my blog.

Author Tamela has extensively traveled the U.S. and Canada, delivering her message to Pack Light | Travel Slow | Connect Deep. Her keynotes and workshops include life lessons she has learned through chance encounters on the road.
Previous Win 13 Books, including “Live Full Throttle”
Next World Traveler-Author Allan Karl with Neale Bayly. Part One of Four