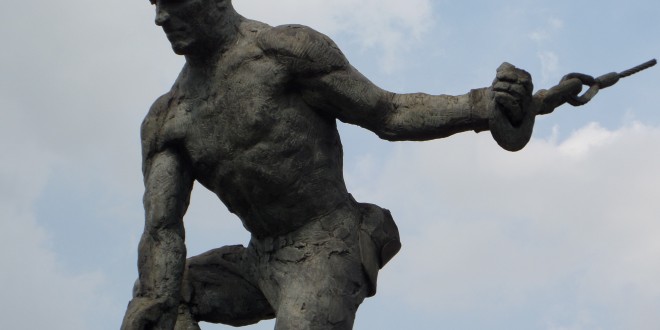 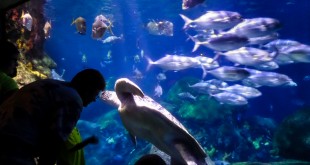 Charlotte to Chattanooga: A Four-Day Itinerary 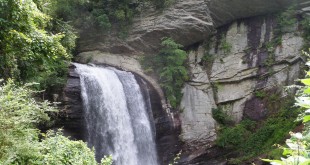 Leaf Peeping and More in the Smoky Mountains 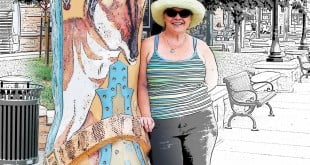 Headed from Cherokee, North Carolina to Chattanooga, Tennessee I started seeing billboards for Rock City and its sister properties on Lookout Mountain everywhere. They gave me a Wall Drug Store feeling.

If you don’t know what I mean by that, you’ve never been within 500 miles of South Dakota. Promotions for the tourist trap (I say that with love) are painted on signs, barns, derelict farm equipment, and fence posts every mile or so along The Mount Rushmore State’s Interstate 90. They’re elsewhere, of course, even as far away as Antarctica (9333 miles).

I mention Wall Drug because, fun as it is, it’s overblown. I was concerned that the attractions on Lookout Mountain might fall into that category. In fairness, it would be hard to live up to that level of hype.

UPDATE: Here’s what I wrote about Chattanooga when I returned.

I couldn’t decide if I wanted to stop at Lookout Mountain, but there was no doubt that I wanted to see the International Towing and Recovery Museum, less than two miles away. It’s the kind of obscure roadside attraction (too obscure to be called a tourist trap) that always calls to me.

Alas, by the time I pulled in, they were locking the doors, but the sun was just about right for these shots.

According to the website, “The Museum exhibits tow trucks and towing equipment dating back to 1916…The Museum also includes a theater, a library, and a unique gift shop that sells souvenirs related to the towing and recovery industry.”

And who knew that tow trucks had their own event at Talladega Speedway? One of the record-holders raced at 109.33 mph. Holy cow. Click here for the official video.

At first I was taken aback by the “Wall of the Fallen” inductees, listed on plaques surrounding the monument pictured left. Those honored on the Wall lost their lives rescuing others. The 2014 honorees include an Irishman and a Canadian in addition to four Americans.

On reflection, I thought when’s the last time we considered the dangers that tow truck operators and other first responders face while getting us out of dangerous situations?

And aren’t you glad someone knows how to operate the Jaws of Life?

Next time I’m in Chattanooga (and yes, I will be back!) I’ll be sure and take the full tour. 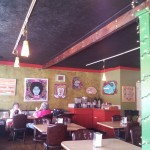 Since I missed the chance to tour the museum, I whipped out my phone and looked for a vegan restaurant. No, I’m not vegan, but I figured a town the size of Chattanooga would have one. Intestines appreciate green food and fiber.

Both Yelp and Urban Spoon recommended a place I wouldn’t have chosen based on its name. Sluggo’s? Sounds like a garden pesticide (and it is!)

But oh, am I ever glad I went with the recommendations.

I appreciate when chefs go with the strengths of plant foods instead of trying to make veggies, fruits and grains taste like flesh and dairy.

Sluggo’s offers plenty of gluten-free choices and it even offers packets of Stevia with the other condiments—I pack my own Stevia since it’s hard to find on the road.

Sluggo’s itself has a legitimate hippy vibe and played music that might have been Bob Dylan’s or one of his proteges. I should have asked.

Beautiful bridges and a vibrant riverside

The route from the Towing & Recovery Museum to Sluggo’s takes you through downtown and over the Tennessee River. What a sight! The Market Street draw bridge and Walnut Street “camelback truss” bridge are freshly painted with terrific views.

If you visit Chattanooga, allow time to walk across the river on Walnut Street Bridge, one of the world’s longest pedestrian bridges.

I hadn’t done any research on Chattanooga, besides the Towing and Recovery Museum, and I had plenty of time before I needed to arrive at the BMW Riders Association Rally in Birmingham, Alabama so I cast my traveling fortunes to the Universe and poked around on the riverfront for a bit. It was irresistible.

You can always judge the spirit of a city by what happens after business hours on a weekday. I found Chattanooga on a Wednesday night to be one of the most vibrant I’ve visited.

Sure, lots of places are designed with tourists in mind, like the Tennessee Aquarium, Chattanooga Choo Choo, Delta Queen and Chattanooga Ducks, but it also has plenty of open-air eateries, parks, walkways and a bike sharing program for residents.

I was delighted to see that they dual-purposed a parking garage exterior as a rock climbing center. Ingenuity!

No longer the “Dirtiest city in America”

I read in a magazine at Sluggo’s that in 1969 Walter Cronkite called Chattanooga the “Dirtiest city in America.” The air was so polluted that people had to drive with their headlights on to see in broad daylight. Now it’s one of the country’s most progressive.

How’d it manage a turnaround of such magnitude? Learn about its inclusive citizen-planning process in this video (sorry, no embed link). For anyone in the change management or community-building business you’ll be inspired by how they made a 60-person steering committee work. “Barriers melted when people came together,” said one civic leader.

And for anyone who thinks privatization is ALWAYS best, take note:  Chattanooga’s city-owned Electric Power Board runs its own network, offering higher-speed service than any of its private-sector competitors can manage. Who can say “virtually unlimited bandwidth” without grinning?

Chattanooga officials say the network has helped spark a burgeoning local tech scene and the relocation of a number of businesses, drawn by both the fast Internet and the reliability offered by the smart grid. ~CNN Money

I would move to Chattanooga in a skinny minute!

I reluctantly left the riverside and went back across town to Rock City to scope out the hype, knowing it would soon close for the evening. I wanted to decide whether to zip out of town the next morning or stick around to sample its charms with the rest of the tourists.

I ran into a fellow BMW motorcyclist in the parking lot of Ruby Falls, which you approach near the foot of Lookout Mountain. Sure enough, he was also headed to Birmingham for the rally. He had just seen the underground waterfall (Ruby Falls) and gave me his report.

So did I stay or go to Rock City the next day? Stay tuned.

UPDATE: Here’s the post I wrote about my return visit to this fabulous city.

Author Tamela has extensively traveled the U.S. and Canada, delivering her message to Pack Light | Travel Slow | Connect Deep. Her keynotes and workshops include life lessons she has learned through chance encounters on the road.
Previous Cherokee and the Great Smoky Mountains National Park
Next Win 13 Books, including “Live Full Throttle”