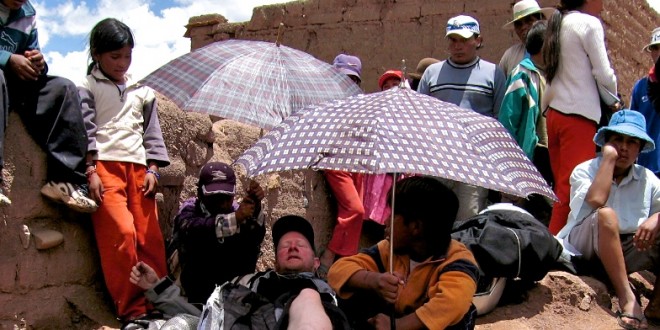 In the first Part of this four-part series, you met Allan Karl and Neale Bayly.

Part Two features Allan’s story from Bolivia, where he suffered a crushed leg from a crash that detoured him for six months on his trip around the world as he flew back to the states for medical care and physical therapy.

His crash was in a remote part of the country and the only medical care available to him for days was ibuprofen. That part of his story is in his book, “Forks: A Quest for Culture, Cuisine and Connection.” What isn’t in the book is what happened when he returned to Bolivia and crashed again. We’ve got that right here in Part Two.

The question I’m most often asked about my solo travels is whether I’m afraid of all the strangers “out there.” Like Allan, I’ve found that the vast majority of people are well-meaning and will go out of their way to help you out of a jam. In Allan’s case that meant transporting him some twelve hours down a mountain in a rickety vehicle during a thunderstorm.

Author Tamela has extensively traveled the U.S. and Canada, delivering her message to Pack Light | Travel Slow | Connect Deep. Her keynotes and workshops include life lessons she has learned through chance encounters on the road.
Previous A Child Bride’s 30th Wedding Anniversary
Next World Traveler-Author Allan Karl with Neale Bayly. Part Three of Four