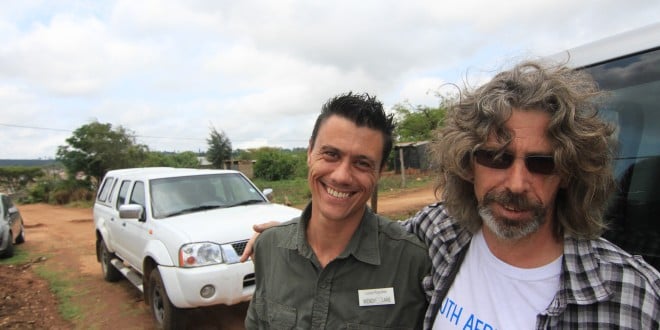 A story on NPR earlier this year says voluntourism—volunteering while on vacation—is one of the fastest growing trends in travel today.

More than 1.6 million volunteer tourists are spending about $2 billion each year in the communities they serve. This does not include the value of the projects they are involved with.

Research quoted in the NPR story indicates most volunteer tourists are Millennials between the ages of 20 and 25, and predominantly female. College students often take up voluntourism to boost their resumes or gain experience in fields that require international travel.

Today’s podcast guests offer voluntourism by motorcycle to benefit orphans in developing countries. But their voluntourists are Baby Boomers and Gen Xers, not Millennials. Neale Bayly and Drew Alexander of Wellspring International Outreach talk about this unique take on voluntourism.

Drew heads up operations for White River, South Africa, where Wellspring riders recently built a home for a grandmother raising six children and a hut to replace the one a twelve-year-old boy was living in until it collapsed on him in a rainstorm. More about those stories in the podcast.

Neale is the star of Neale Bayly Rides, a three-part reality TV series that debuted in 2013 on what’s now Fox Sports 1. In that series and in his voluntourism service projects, Neale uses motorcycle travel—often through extreme riding conditions—as a way to “soften affluent people up” to humanity. This allows the rider-volunteers to become emotionally available for the service projects at the end of their adventures.

For many voluntourists, the prospect is overwhelming.

As Neale says, “Culture shock is a tough thing to deal with…Sometimes you don’t know know you’ve got it…It’s like getting vertigo in the mountains; you can’t look up and look down at the same time.

Some people repel it, some people immediately embrace in, others jump in full throttle, and other people are ambivalent.”

Neale’s TV series introduced the world to his charity work with Wellspring International Outreach, which he founded six years ago to help further the work at the Hogar Belen orphanage in Moquegua, Peru. As he described in our TEDx Charlotte talk earlier this year, he was inspired to help the Peruvian orphans by Father Gio, a Canadian Catholic priest whom Neale met by chance encounter in the Andes over 20 years ago.

I hope you’ll click the “play” button at the top of this post and listen to Neale and Drew talk about their work. The stories they tell from their recent trip to South Africa will explain the transformation they’ve seen in themselves and in others who accompany them on these service projects and raise funds for ongoing operations.

Author Tamela has extensively traveled the U.S. and Canada, delivering her message to Pack Light | Travel Slow | Connect Deep. Her keynotes and workshops include life lessons she has learned through chance encounters on the road.
Previous Six Ways to Avoid Airline Baggage Fees
Next Lessons on Gift Exchanges: Stuff ≠ Love