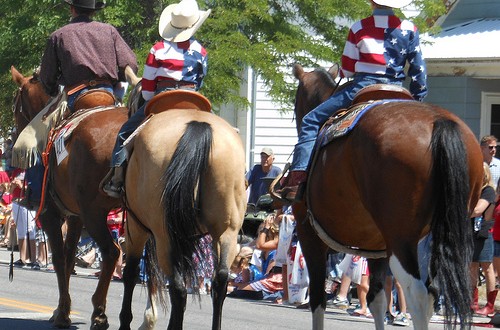 Under cloudless Big Skies, I lined up with other tourists and the townsfolk of Red Lodge, Montana to watch the 7th Calvary Drum and Bugle Corps open the annual Independence Day parade with a flourish. Sometimes the hand of Providence dishes up a treat, because I didn’t know Red Lodge did the day in such a big way when I planned my journey. 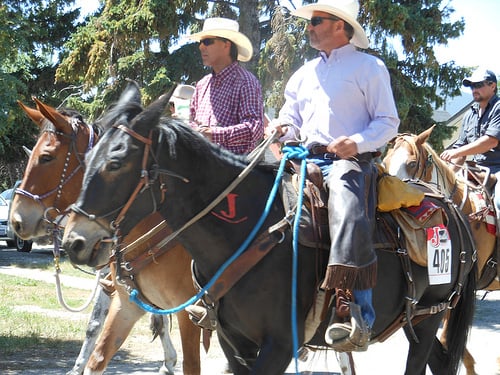 Unlike any parades I’d ever seen back east, almost everyone in this one was either on mule or horseback. Even the medical staff of the local urgent care clinic wore fringed leather chaps over their blue scrub pants.

Rodeo princesses rode in synchronized formations with big flags advertising everything from Justin western wear to Bud Light. True Americana. Back east where I come from, organizers stage horses and at the end of the parade, for the same reason they circus puts elephants back there–followed by the pooper scoopers. Not so in Red Lodge, where the horses and mules were shuffled between the other participants like the suit of hearts in a full deck of playing cards.

Montanans don’t seem to be as dainty as the folks back east, I guess.

It seems to me that with so many horses in Red Lodge, if you packed them all at the very end of the parade, you’d flatten the experience. Instead, the Red Lodge lineup gave the crowds Smokey the Bear riding atop a fire engine followed by a family dressed in red, white and blue, including a little boy whose legs could barely span his horse’s back. I might not have noticed the little cowpoke if he’d been in a sea of horseflesh.

It’s been said (and said, and said again) that variety is the spice of life. I think there’s something to that.

Maybe today you’ll shake up your predictable life just a bit. Vary  your commute, try a new food, listen to a random radio station, or buy yourself a bunch of flowers.

Author Tamela has extensively traveled the U.S. and Canada, delivering her message to Pack Light | Travel Slow | Connect Deep. Her keynotes and workshops include life lessons she has learned through chance encounters on the road.
Previous Standin’ on the Corner
Next Beartooth Highway and Hype