Looking back, I don’t know why I expected the Wyoming Frontier Prison Museum to be fun. Perhaps I succumbed to the pop culture that celebrates and immortalizes crooks like Jesse James, Billy The Kid, Butch Cassidy and The Sundance Kid but sends into obscurity saints who raise orphans and nurse the sick.

Tamela Rich September 28, 2010 On the Road Leave a comment 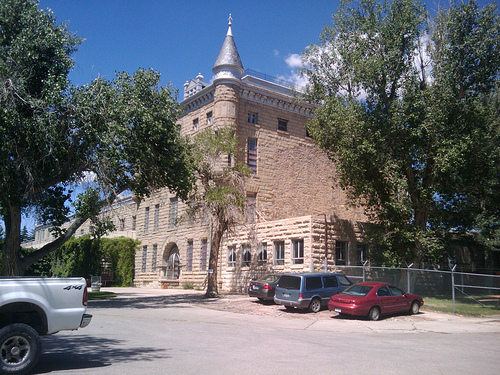 Dateline :7/27/10.  I love using Roadside America to find roadside kitsch and Americana. But looking back, I don’t know why I expected the Wyoming Frontier Prison Museum to be fun.  Perhaps I succumbed to the pop culture that celebrates and  immortalizes crooks like Jesse James, Billy The Kid, Butch Cassidy and The Sundance Kid but sends  into obscurity saints who raise orphans and nurse the sick.

After taking my virtual tour of this historical museum, scroll down for a story on the privatization of corrections. Today nearly 7% of all inmates are housed in private prisons, at a cost of $55b every year.

The prison building itself is better looking than any of the public  schools I attended. It once manufactured brooms and shirts until a 1934 law prohibited the sale or transportation of prison-manufactured goods from one state to another. And yes, they made license plates there, too.

I didn’t have time to stay for the full tour, so here’s the curator answering questions.

It interests me that even the most strident believer in the death penalty doesn’t want to saddle another human being with DIRECTLY killing another. This is why executioners wore masks and why the killing chambers were automated. Here, we see how a little bit of distance could be placed between the executioner and executed — even if just by a bucket of water and series of pullies. Here’s how the “Julian Gallows” worked.

I take a unique position on crime and punishment. I believe in justice for the soul, which means it’s better to be chastened here on earth than to wait for correction in the next life. That said, American jurisprudence isn’t about finding the TRUTH, rather, about WINNING A CASE, which is why so many innocent people are incarcerated or on death row.  Sadly, in 2002, the federal government reported that 1 in every 142 Americans is incarcerated.  While learning about prisoner restraint and history, I was both fascinated and saddened.

And here’s an analysis of the privatization of prisons in America from the PBS magazine NOW. Thoughtful and balanced. And troubling that corporate profit interests could inflate our prison population.

Author Tamela has extensively traveled the U.S. and Canada, delivering her message to Pack Light | Travel Slow | Connect Deep. Her keynotes and workshops include life lessons she has learned through chance encounters on the road.
Previous Women Motorcyclists Like Me on WCNC
Next Kickin’ Kansas