I entered NPR’s Three Minute Fiction contest.  The rules are straightforward: using a prescribed first sentence, write a short story in less than 600 words. If I’m the big winner, I’ll be interviewed and have my story read on-air during Weekend All Things Considered and receive an autographed copy of the book “How Fiction Works” by  The New Yorker’s James Wood, who’s judging the contest.

The nurse left work at five o’clock.  He knew what he was doing, leaving mid-shift, but it was time for a change. A mid-shift departure would make change inevitable.

Leaving the employee parking lot, he waived at the attendant and switched on the news.  More reports of layoffs, expiring unemployment benefits, bank failures…yet, he’d walked out.  Mid-shift.

Pulling into the potholed parking lot, he scanned the fenced-in runs to see if it really was Scamp they’d brought in.  “Puppy prison,” he’d called it when his parents took him to the pound to choose a dog for his 8th birthday.

Prison. Maybe he’d apply for a job at a prison – plenty of job security in a growth industry like that. Maybe he could get a job working on death row, keeping the guys alive until the state could have its justice. He might enjoy working with those who’d accepted their ultimate fate, for a change.

Just an hour before, he’d advised the Johnson family that without a Do Not Resuscitate Order on file, the staff was obliged to keep their mother alive if possible.  Of course he didn’t go running to an administrator just because Mrs. Johnson’s daughter slapped him, but his former co-workers would draw the conclusion that it was the “Johnson family incident” that finally took him over the edge.  Cardiology was notorious for unruly family outbursts. Was it because there was usually no time to plan?

Death row. Opening the door to Puppy Prison he wondered how many they’d gassed today.  The uniformed clerk looked up from her filing and smiled as if she worked at Dairy Queen, not Auschwitz. “Here to pick out a pet?”

“No, my vet called to say you might have picked up my dog – a beagle mix with an attitude.”

Fifteen minutes later and $50 lighter, he and Scamp merged back into traffic.  Fondling Scamp’s notched ear from a long-ago-lost battle, he mused what a perfect match they were – their sweet faces belied a tendency to pick fights they couldn’t win.

Moving his hand to his own lightly-califlowered ear, acquired four days after he’d started the job he’d just essentially quit, he felt the irony that in that case, he’d tried keep a patient from taking his own life. God, that guy was strong. A monster.

Swerving to miss a kid on a skateboard, the sudden jolt swept Scamp and the cell phone onto the passenger floor.  Scamp was no worse for the wear, but the nurse wondered if this was the last tumble for his old phone. He’d resisted replacing it because all the new phones had features he didn’t want.  “Simplicity” was his new watchword.  Life had gotten too complicated.

After a traffic report, NPR ran a story on the nation’s death panel hysteria. Yeah, everyone’s a little crazy right now. The living take their lives and the dieing want to prolong theirs. Whatever happened to the role of Providence in these things?

Pulling into his driveway alongside the lime green Beetle driven by the home health aide, he was glad his father was past noticing the early hour of his arrival. Pop’s days and nights were indistinguishable to him now.

Scamp pushed past his master. Trotting straight to the living room where they’d set up Pop’s hospital bed, which be one of those hospital beds that are popular online, the dog uncharacteristically stopped and whimpered.  The aide looked up; “I’m so sorry,” she sobbed, “I tried calling your cell phone ten minutes ago.”

From Charlotte, NC, Tamela writes books, articles, speeches and presentations for business professionals. From "the road" she writes about the people, places and experiences she discovers and the life lessons she learns from them. Invite her to share some of her lessons from the road at your next event!
Previous Chocolate Copy
Next “Undelivered” Email 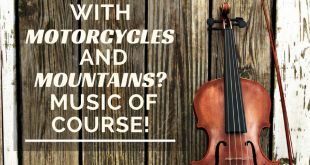 There are lots of motorcycle "bucket list rides" in Appalachia, especially the Blue Ridge province. As a matter of fact Motorcycle Roads website ranks 30 of the top 100 motorcycling roads in America in the region.