If you've read any of these, please write your thoughts/a review.  Here's what's on my radar. 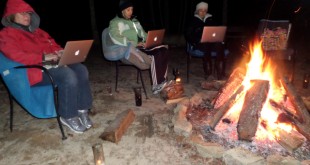 If you’ve read any of these, please write your thoughts/a review.  Here’s what’s on my radar. 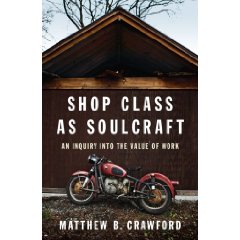 Philosopher and motorcycle mechanic Crawford presents a fascinating, important analysis of the value of hard work and manufacturing. He reminds readers that in the 1990s vocational education (shop class) started to become a thing of the past as U.S. educators prepared students for the “knowledge revolution.” Thus, an entire generation of American “thinkers” cannot, he says, do anything, and this is a threat to manufacturing, the fundamental backbone of economic development. Crawford makes real the experience of working with one’s hands to make and fix things and the importance of skilled labor. His philosophical background is evident as he muses on how to live a pragmatic, concrete life in today’s ever more abstract world and issues a clarion call for reviving trade and skill development classes in American preparatory schools. The result is inspired social criticism and deep personal exploration. Crawford’s work will appeal to fans of Robert Pirsig’s classic Zen and the Art of Motorcycle Maintenance and should be required reading for all educational leaders. Highly recommended; Crawford’s appreciation for various trades may intrigue readers with white collar jobs who wonder at the end of each day what they really accomplished.  – Library Journal 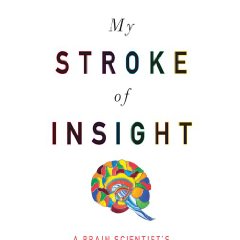 My Stroke of Insight: A Brain Scientist’s Personal Journey by Jill Bolte Taylor

On the morning of December 10, 1996, Jill Bolte Taylor, a thirty-seven-year-old Harvard-trained brain scientist, experienced a massive stroke when a blood vessel exploded in the left side of her brain. A neuroanatomist by profession, she observed her own mind completely deteriorate to the point that she could not walk, talk, read, write, or recall any of her life, all within the space of four brief hours. As the damaged left side of her brain–the rational, grounded, detail- and time-oriented side–swung in and out of function, Taylor alternated between two distinct and opposite realties: the euphoric nirvana of the intuitive and kinesthetic right brain, in which she felt a sense of complete well-being and peace; and the logical, sequential left brain, which recognized Jill was having a stroke, and enabled her to seek help before she was lost completely.

In My Stroke of Insight, Taylor shares her unique perspective on the brain and its capacity for recovery, and the sense of omniscient understanding she gained from this unusual and inspiring voyage out of the abyss of a wounded brain. It would take eight years for Taylor to heal completely. Because of her knowledge of how the brain works, her respect for the cells composing her human form, and most of all an amazing mother, Taylor completely repaired her mind and recalibrated her understanding of the world according to the insights gained from her right brain that morning of December 10th.

Today Taylor is convinced that the stroke was the best thing that could have happened to her. It has taught her that the feeling of nirvana is never more than a mere thought away. By stepping to the right of our left brains, we can all uncover the feelings of well-being and peace that are so often sidelined by our own brain chatter. A fascinating journey into the mechanics of the human mind, My Stroke of Insight is both a valuable recovery guide for anyone touched by a brain injury, and an emotionally stirring testimony that deep internal peace truly is accessible to anyone, at any time. — Amazon Review 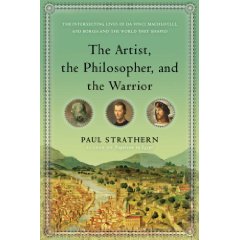 The Artist, the Philosopher, and the Warrior: The Intersecting Lives of Da Vinci, Machiavelli, and Borgia and the World They Shaped by Paul Strathern

Despite the convoluted title, this latest from award-winning British novelist and historian Strathern (Napoleon in Italy) is simply a good, straightforward history of Renaissance Italy during the turbulent decade around 1500, with emphasis on several important players. Pope Alexander VI, though not in the title, is the central player. Famously corrupt and ambitious, Alexander aimed to enlarge the Papal States and his family’s influence, and his son, Cesare Borgia, led papal armies in three cruelly successful campaigns. The leading diplomat of wealthy but feeble Florence, Machiavelli worked hard to fend off Borgia, but admired his brutal realism, portraying him as the ideal ruler in his classic, The Prince. Both men knew Leonardo da Vinci, and Borgia employed him as a military engineer. However, da Vinci exerted no political influence, so the author’s digressions into his art and ingenious (but mostly unrealized) inventions stand apart from the narrative. Readers will reel at this meticulous popular account of Renaissance tyranny, corruption, injustice and atrocities. 8 pages of color illus., b&w illus., maps.  — Publishers Weekly 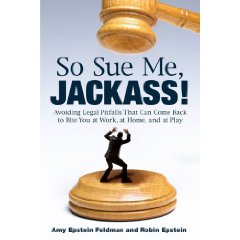 So Sue Me, Jackass!: Avoiding Legal Pitfalls That Can Come Back to Bite You at Work, at Home, and at Play by Amy Epstein Feldman and Robin Epstein

“This fun and funny book offers a wealth of practical and jaw-dropping legal insight, administered in a uniquely painless fashion. It also offers one of the most arresting author photos in the history of Anglo-American jurisprudence.” –Roger Parloff, senior editor for legal affairs, Fortune magazine

*Special hat tip to my Twitter friend @Character_B for bringing this book to my attention. He’s an insider on the project.

Bright-sided: How the Relentless Promotion of Positive Thinking Has Undermined America by Barbara Ehrenreich (Oct)

“We’re always being told that looking on the bright side is good for us, but now we see that it’s a great way to brush off poverty, disease, and unemployment, to rationalize an order where all the rewards go to those on top. The people who are sick or jobless—why, they just aren’t thinking positively. They have no one to blame but themselves. Barbara Ehrenreich has put the menace of positive thinking under the microscope. Anyone who’s ever been told to brighten up needs to read this book.” —Thomas Frank, author of The Wrecking Crew and What’s the Matter with Kansas?

In this utterly original take on the American frame of mind, Barbara Ehrenreich traces the strange career of our sunny outlook from its origins as a marginal nineteenth-century healing technique to its enshrinement as a dominant, almost mandatory, cultural attitude. Evangelical mega-churches preach the good news that you only have to want something to get it, because God wants to “prosper” you. The medical profession prescribes positive thinking for its presumed health benefits. Academia has made room for new departments of “positive psychology” and the “science of happiness.” Nowhere, though, has bright-siding taken firmer root than within the business community, where, as Ehrenreich shows, the refusal even to consider negative outcomes—like mortgage defaults—contributed directly to the current economic crisis.

The Buyout of America: How Private Equity Will Cause the Next Great Credit Crisis Josh Kosman (Nov)

With exhaustive research and a rogues’ gallery of interviews, journalist Kosman puts together a convincing and disquieting argument that private equity firms are about to cause the next great credit crisis. Many people don’t realize that “private equity” is just a new name for a leveraged buyout, and that private equity firms make their money by loading their acquired companies with debt, garnering short-term gain at the cost of the businesses’ financial longevity. Exposing the pernicious practices of various high-profile firms (including Mitt Romney’s company, Bain Capital, notorious for its company-destroying practices), Kosman reveals how they cripple their acquired businesses competitively, limit growth and cut jobs without reinvesting the savings, all without even generating good returns for their investors. But if only half of PE-owned businesses go bankrupt, that would leave almost two million Americans out of jobs. What’s to be done? Kosman is a proponent of legislation that encourages buyers of companies to hold on to them for at least five years. This alarming book will keep anxious credit watchers on their toes—and hopefully inspire some pressure to keep PE firms from going the way of mortgage brokers.  — Publishers Weekly

The Mom & Pop Store: How the Unsung Heroes of the American Economy Are Surviving and Thriving

From Charlotte, NC, Tamela writes books, articles, speeches and presentations for business professionals. From "the road" she writes about the people, places and experiences she discovers and the life lessons she learns from them. Invite her to share some of her lessons from the road at your next event!
Previous Dwight’s Death
Next Me, the Twitter Panelist