Lessons on Flexibility and Ego

Every day of each road trip has its own theme. The first week of my 2012 road trip dished up plenty of chances to exercise flexibility and to get my ego in check.

Delayed before Day One

I had planned to leave from the southernmost point of the Blue Ridge Parkway near Cherokee, NC and ride all the way north on it to Skyline Drive in Virginia. I intended to earn a travel badge of honor (of sorts) by taking in every single mile of both legendary roads.

I am a business ghostwriter (will write for gas money and a set of new tires!). Two days before I planned to put the kickstand up, one of my clients received the good news that he was being offered a book contract by McGraw Hill and needed some key points from me that would help him negotiate the contract. I decided it wouldn’t hurt to leave a day late and shave a couple hundred miles off the itinerary, so I did, getting on the Parkway near Asheville, NC, where I rode with my dear friend K.

More flexibility was called for, however. I smashed my phone near the end of the second day of the trip and had to get off the Parkway for good at Natural Bridge, VA to look for a TMobile store, which I didn’t realize was impossible in western VA (Wal-Mart and Costco stores can’t handle insurance claims). Eventually I took care of business at a store in MD, and arranged for the replacement to be shipped to my next stop at the KOA in Niagara Falls, NY. I managed to catch the last segment of Skyline Drive through the Shenandoah National Forest from Gettysburg, PA. If you’d like a more “touristy” account of the Parkway and Skyline Drive, check out my story on SpeedTV.

Lesson: When you can’t meet one goal without jeopardizing more important ones, think strategically, and press on. Travel badge of honor, I’ll get you another day (if I so choose).

Jill joined me in Niagara Falls and after a sunny day of touring that area en route to Parry Sound, we awoke the next morning to sprinkles with a forecast of steady rain and possibly thunderstorms in the Georgian Bay area of Ontario. We didn’t have a choice to wait for better weather, since Jill had a can’t-miss date with her daughter in Ohio, so we donned rain gear and set out. Real bikers are not rain sissies.

By the time we reached Sudbury I was cold, wet and hungry. My pants had developed a little portal in a seam and cold Canadian rain was rolling down into my waterproof boots.  Dismounting the bike, I sloshed into the Tutti Fruitti restroom (called a “washroom” in Canada) to wring everything out. When I whipped out my camera to take a picture of the beautiful meal you see here, my not-yet-month-old-camera was unresponsive. Fortunately Jill had her phone and snapped one for me. I hadn’t bothered carrying my phone because the international rates are exorbitant and, after all, I bought a CAMERA for pictures.

Speaking of help from Jill, she kindly lent me a pair of rain pants so I could ride the rest of the way in comfort once again. What a doll.

Pulling into Sault Ste. Marie (the Ontario side) for fuel, I had a mini-meltdown when I broke the hinge off my gas cap.

Lesson: This was a case where, like for want of a horse shoe nail, the war was lost (see below), for want of $400 I’ll now be spending $650. How’s this? I’ve been limping along with saddlebags that aren’t quite made for my bike and, short story, by not spending $400 for the right bags, I’ll end up spending $250 to replace the gas cap assembly that got in the way of the “wrong” bags, and still have to spend $400 for the right bags. Sigh.

For Want of a Nail 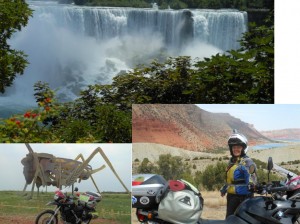 Firing up my computer to find the closest Best Buy, where I intended to put in a warrant claim on the camera, the KOA owner in Sault Ste. Marie overheard me talking to Jill about the lack of Best Buy stores in western Ontario. He said the Canadian stores might not honor an American warranty, so I checked and he was right. So once again, I had to make a choice about foregoing a major leg of my journey to deal with equipment failure.

Paying attention to my inner dialogue, I realized how silly I was in the first place for planning to run through many of the same towns in Manitoba and Saskatchewan as I’d traveled through last year. I acknowledged to myself that I’d just planned to do those provinces again for the sake of saying I’d done three provinces in 2012. Travel badges of honor are really just an ego stroke, eh?

Lesson: Put your ego aside and do what calls to you instead of worrying about another notch on your belt.

The re-route through the Upper Peninsula turned out to be fortuitous. I loved every minute of it, especially the Great Lakes Shipwreck Museum. I had my first “pasty” in Duluth, MN, where I got the “insider” tour of the legendary motorcycle gear maker and travel outfitter, Aerostitch. In Marquette (MI, not WI), I was introduced to the delicious Cudighi sausage, which I’d never even heard of before.

Not a total bust, by any means

I hope this post doesn’t give the impression that my first week on the road was a disaster. On the contrary, I rode with friends through beautiful country. I met some wonderful people, including the retired zookeeper at the Buffalo, NY Zoo (what stories we could have heard if we’d had an entire day to buy him coffee at Tim Horton’s!). I got to see parts of the US and Canada that I’ll definitely revisit, most notably the the Park to park Trail system in Ontario, 143 miles of trails you can use on foot, bicycle, horse, dog sled, dirtbike, snowmachine, ATV and UTV. Yes, I said dog sled, this being Canada and all!

Most important, I learned about the danger of negative self-talk. I whipped myself into a downward spiral of self-doubt for no reason at all. I started thinking superstitious thoughts like, Are my equipment failures trying to tell me something? Should I quit while I’m ahead?  Sometimes equipment failures are just that.

By the time Jill left in Sault Ste. Marie I wasn’t in the right frame of mind to go any further. I extended my visit there by a day and just napped, took care of client work and got to know the area. Sometimes I find that I just have to hold space for my doubts and darker thoughts with the promise that once I’ve given them their due, they need to make room for more productive thoughts and feelings. Sure enough, by the time I returned from an all-day train trip from Sault Ste. Marie to the Agawa Canyon, in the company of a lovely couple from Wisconsin and to the serenades of some Mennonite children signing hymns on the Agawa Canyon train, I was ready to get back on the bike.

If you love pictures, here’s my Flickr site for my 2012 road trip. I update it as wireless connectivity permits! And again, here’s an account of the marvels of the Blue Ridge Parkway.

Author Tamela has extensively traveled the U.S. and Canada, delivering her message to Pack Light | Travel Slow | Connect Deep. Her keynotes and workshops include life lessons she has learned through chance encounters on the road.
Previous Product Review: LD Comfort
Next Signing Books at the AMA International Women and Motorcycling Conference!