I want to read (but haven't yet) these four books: The Myth of the Rational Market, The Ascent of Money, Guts: Combat, Hellraising, Cancer, Business Startups and Undying Love, and Habit. Please write a review or give me a thumbs up/down on these four if you read them already.

Artists have to Eat

If anyone’s read these, please write a review.  My appetite for books far exceeds the time I can devote to them.

The Myth of the Rational Market: A History of Risk, Reward, and Delusion on Wall Street 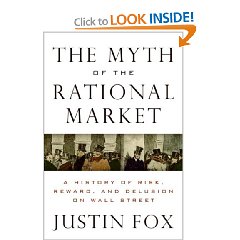 Excerpts from The Washington Post’s review
Fox, a business columnist for Time, spins a fascinating historical narrative, beginning with economist Irving Fisher’s paean to markets in, alas, 1929. Postwar economists such as Paul Samuelson noticed that most investment pros do not beat the averages. This led to the one positive contribution of the efficient-market hypothesis: Jack Bogle’s invention of index funds, which mimic the performance of the stock market as a whole and keep ordinary people from wasting their money trying to beat it. Fox recognizes that true believers in the market’s efficiency suffered from a “blinkered” mindset and “tunnel vision.” Yet I think he lets them off too easily. He laments (as if it were necessary) the lack of any alternative “grand new theory” and finds that the debate has resulted in a “muddle.”

Fox concludes, “If you do come up with an idea for beating the market, you need a model that explains why everybody else isn’t already doing the same thing.” Not necessarily. Markets aren’t physics. Maybe no one model explains them. The emerging school of behavioral finance fills in many of the gaps left by the efficient marketers. Behavioral finance, which Fox discusses at length, holds that financial man — far from the perfect, mechanical trader depicted in textbooks — is a rather neurotic fellow. He follows the crowd, fails to plan ahead and often makes mistakes. To think that his every price is perfect is a remarkable error indeed.

The Ascent of Money:  A Financial History of the World 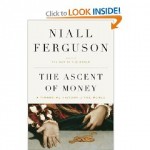 Excerpts from The Washington Post’s review

The pleasure of reading Ferguson’s treatment comes partly from the clarity of his explanations of financial concepts but mostly from his pen portraits of the extravagantly gifted and flawed characters who have led money’s long rise. He shows us how far we have come since Mesopotamian moneylenders developed rudimentary accounting around 1,000 B.C. and the Medici created elements of modern banking in 14th- and 15th-century Florence. But he also weaves a long series of manias, panics and crashes into his tale. The Medici family’s surviving papers, he notes, bear scorch marks from the vengeful reformist Savonarola, who set up a Bonfire of the Vanities to destroy sinful goods and sent the Medici packing in one of the periodic reversals of fortune to hit financial leaders over the centuries.

Ferguson sketches the rollicking career of John Law: Scottish con man, killer, genius, lover and creator, in 1719-20, of one of history’s great stock market bubbles. Law effectively took control of the French national debt, substituted paper currency for gold and sold shares in the company that controlled French Louisiana. As the shares rose in price and investors borrowed against them, the volume of paper money doubled in a year, breeding inflation, speculation and the new term “millionaire” before Law’s system collapsed. From that day on, Ferguson writes, all bubbles have followed five stages:

1) Displacement, as economic change brings a chance for extraordinary profits; 2) Euphoria, as investors take advantage of the opportunity, 3) Mania, as novices, crowds and swindlers rush in; 4) Distress, as insiders see their prospects for profit declining because of the mania and start selling; and 5) Revulsion, as all stampede for the exits. 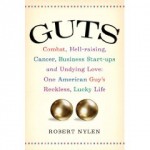 From Publishers Weekly
Vietnam vet, cofounder of New England Monthly and a media consultant, Nylen, who died last year, shares with punchy humor and tremendous grace his tough approach to taking risks and staring down exacting bosses as well as cancer.

Cherishing such stoical role models as Don Quixote and Ulysses S. Grant (as well as his own father, who spent his prime years as a DuPont executive before a traumatic fall altered his life permanently), Nylen celebrates America’s admiration with gutsiness, and his own lifetime attempts (frequently foolish) to make the Cool Guys Hall of Fame.

The bulk of this memoir is Nylen’s facetious though moving account of his stint as an infantry officer in Vietnam in 1968, and the men he loved and lost—the ghastly experience, he assures readers, was never accurately depicted in popular movies. Shell-shocked, married after release from the army, simulating a normal person and appearing unemployable, he began his accidental career as a media ad salesman starting at Look magazine, dealing with tough bosses like Bill Dunn at U.S. News and World Report and Mike Levy at Texas Monthly before embarking on his own.

Diagnosed with colorectal cancer stage III when he was 60, he endured treatments, surgeries, pain and frequent accidents of his own making, but preserves his cheerful, frank, optimistic and ever competitive spirit in the face of mortal adversity.

*Notes:  The review doesn’t mention that Nylen founded BeliefNet.com.  And yes, I believe that is a set of brass balls on the cover.

Habit: The 95% of Behavior Marketers Ignore 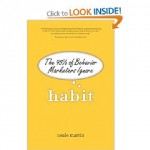 In his first book, communications consultant-to-the-stars (Sprint, Nextel, Cisco, Nortel, TI, Motorola) and “expert in consumer behavior” Martin uses ideas from the worlds of science, technology, psychology, history, philosophy and business to demonstrate how a consumer’s unconscious controls most of his or her behavior. As a result, Martin argues, companies large and small are wasting money and energy engaging the wrong part of the brain (my emphasis added) -rather than worrying over expected behavior or ultimate satisfaction, marketers should focus on how buying habits form through simple, time-tested methods like reward and repetition.

How else would brands like Microsoft-infamously frustrating but ingrained in the culture-and Starbucks coffee-overpriced but ubiquitous (and literally addictive)-make it? In a reportorial style fit for both marketing executives and savvy consumers, Martin presents interviews with marketers, researchers and scientists that outline the principles supporting his method, delineating the executive mind from the habitual (unconscious) mind, exploring how an ideal product like the iPod targets both minds, and providing a blueprint for creating habitual buyers. Martin’s argument requires readers to suspend some long-held beliefs about consumers, but rewards them with some eye-opening perspective.

Another Tweep told me about Paul Krugman’s review of the book in NYT.

From Charlotte, NC, Tamela writes books, articles, speeches and presentations for business professionals. From "the road" she writes about the people, places and experiences she discovers and the life lessons she learns from them. Invite her to share some of her lessons from the road at your next event!
Previous Play Piano, Outrun Mean Dogs: All in your Brain
Next “I loved the way he used PowerPoint”