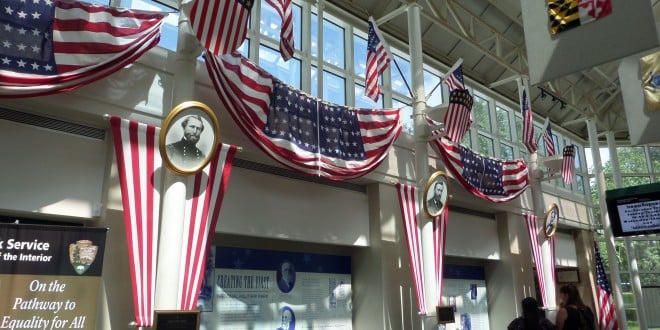 Buntings and fanfare aside, we can do much better by our veterans 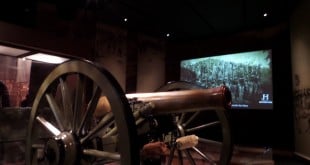 Alonzo Cushing and my Gettysburg visit

Sometimes the people I meet in my travels give me an unexpected glimpse of a life that I could also be living. For better and for worse.

On my recent swing through New England, I visited Shelburne Falls, Massachusetts, known for its pedestrian-only Bridge of Flowers.

The bridge was built in 1908 for trolleys to cross the Deerfield River between the towns of Buckland and Shelburne. When the trolley line discontinued in 1928 the local women’s club took charge. Today, over 500 varieties of annuals and perennials are planted along the 400-foot span, thanks to the work of volunteers.

After going shutter-crazy on the bridge with my new camera and touring some local art galleries, my traveling companion Jill and I returned to the Buckland side of the bridge, where we’d parked our bikes.

Some tea and cherries with a Vietnam veteran

McCusker’s Market and Deli was a great place to grab some local-organic produce to supplement our bagged lunches. Its tables faced the bridge; perfect for people-watching.

Shortly after sitting down and opening our feed sacks, a man in his late ’60’s (or so) ambled over and took the seat to my right. I had seen him earlier when we parked and figured he was a local, just passing the lovely Saturday as we were. We said “Good afternoon,” and he smiled and returned the greeting.

It didn’t take long for me to notice his un-showered tang, but I didn’t give it much thought. When I asked him if he lived in Buckland he replied that he was homeless until his benefits were approved and he could move near his daughter and grandchildren, some two hours away.

He said it as matter-of-factly as I may have said I was from Charlotte.

Candidly, I was in uncharted conversational territory. I asked if we could offer him something to drink and he graciously accepted the bottle of Honest Tea I proffered. He didn’t take his thanks over the top. I liked him for that.

It came to me that I shouldn’t put his homelessness at the center of our conversation.  I had no business questioning him on the subject. I  decided to treat him as I do every other person I meet by chance on my travels. So I asked him if there was anyplace he would recommend we see before we left the area.

We are more than our resumes convey

Over the next forty-five minutes of engaging conversation, we learned that he had served in Vietnam, had been an EMT with an ambulance service in Hawaii, and spoke a First Nations language in addition to English. We were fascinated by what he told us about some of the tribe’s matrilineal customs and spiritual practices.

We shared some cherries with him from the pint we bought at McCusker’s. At first he said he would only take a couple, but every few minutes or so I would wordlessly hand the green container over to him and he would delicately pluck one or two of them out by their stems. He refused everything else we offered him.

He had an older-generation phone with pictures of his grandchildren on it, and told us a couple of cute stories about them. In the course of conversation it came out that the benefits he currently receives are mailed to him at his daughter’s address, but they are insufficient for lodging. He hoped to have everything approved so he could get a little place by January, which made me wonder how he would keep body and soul together in the months between.

I looked at this week’s forecast. Daytime is mid-50’s and below freezing at night.

Several years ago I heard a middle-school student talk about what she learned about homelessness when she participated in a youth program sponsored by Mecklenburg Ministries, whose board I once chaired. She said she thought it should be called “houseless-ness” instead of “homeless-ness,” because many people she encountered during her volunteer service had a definite sense that our city is their home. They just need a safe, warm, dry place to live.

The homeless veteran I met definitely had the sense that Massachusetts was his “home.” Food for thought.

Doing our part for veterans

The VA systems have not been updated since 1985 “in an appreciative manner” according to congressional testimony this summer. Jon Stewart, of The Daily Show, offers an entertaining-while-scathing commentary on the VA.

Co-authors of a new book on veterans Howard Schultz (Starbucks CEO) and Rajiv Chandrasekaran (Washington Post Associate Editor) observe how difficult it is for veterans to get private-sector jobs.

The press, politicians and even many veterans’ advocacy groups tend to focus, with legitimate reason, on service members who have returned banged up or who are struggling in their new civilian lives…

(Being asked) ‘Did you ever kill anyone?’ prompted one active-duty soldier to tell us that he is more nervous about sitting for a job interview than he is about redeploying to Afghanistan.

Here’s a video of the authors talking about some of the stories in their book and why Starbucks is so committed to hiring veterans.

Like me, you may not be in a position to affect national policy or to hire a veteran, but at an individual level, we shouldn’t jump to the conclusion that every veteran we meet is suffering from PTSD (post-traumatic stress syndrome) and shy away.

My life was enriched by that homeless veteran at the Bridge of Flowers. I’m grateful for the encounter and I’ll remember this Vietnam veteran on this and every Veterans Day.

Author Tamela has extensively traveled the U.S. and Canada, delivering her message to Pack Light | Travel Slow | Connect Deep. Her keynotes and workshops include life lessons she has learned through chance encounters on the road.
Previous Alonzo Cushing and my Gettysburg visit
Next Brattleboro’s Culture Makes You Think