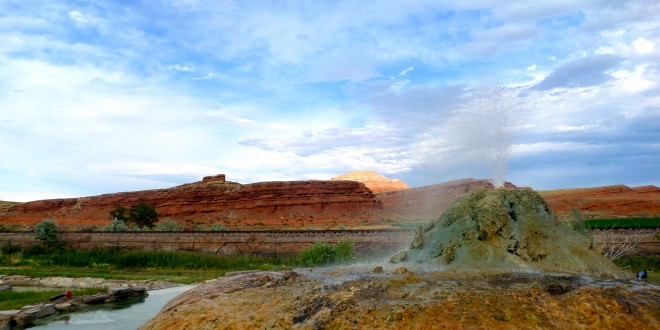 Tetons at Night, Keep Your Focus

I must confess that I am a lingerer. I linger with friends, with that interesting person over a cuppa, with that play of sunlight over the river. Because I am a lingerer, I have to pay the consequences of time running short, even in midsummer.

Leaving Greybull, Wyoming, where good friends from the States and Canada had gathered for the annual Conga fundraiser for breast cancer, I lingered.

Touring Thermopolis, home of the world’s largest hot spring, I was fascinated by the mineral monuments, especially the Tepee Fountain.

Dinner at the Cowboy Cave in Dubois was topped off with the best pie I’d ever eaten–a mix of berries without  the usual goo.

The sun is setting anyway, why rush?

Caught after dark without tarmac

As the sun went behind the Tetons, those jagged cliffs in silhouette reminded me of an Indonesian puppet show. It was lovely, and that loveliness took my mind off the many things that could go wrong after dark, like all the big animals that could run out and clobber me, leaving me vulnerable to other dangers as I waited ten or fifteen minutes for another vehicle to come along.

When I came upon a sign that indicated road construction ahead, I didn’t give it any thought. The season is short at altitude and all the roads are in some state of repair during the summer.

Nowhere did it indicate that the tarmac was missing. It just ended.

So there I was, riding on substratum after it had rained. The ground was hard but slimy, and there were  no lane indicators or markers of any kind. My headlight is feeble (I need to save up for those Denali lights) and there was no oncoming traffic to guide the way.

What was I to do? Ride. Just ride.

Of course I slipped, but my BMW is a dual sport (for riding on- and off-road) and I’d been well trained by BMW to ride in sloppy conditions, so I stood on the pegs and let that fearful shiver pass. What other course did I have? None.

I kept my eyes up, scouting for animals, not down, where the light was strongest but where it would be too late to take evasive action (and there’s a life lesson in that).

Of course I started in on myself. Oh Tamela, look what you’ve gotten yourself into. You shouldn’t have lingered. You shouldn’t have stopped to eat…blah blah blah. But I had the discipline to unwind it. I couldn’t let negative self-talk get in my way of staying focused on the task at hand.

I replaced that with this isn’t even muddy, just slick. Good job with that wobble. This can’t go on forever. Through the ten miles of slime I did occasionally slip–that’s when you Throttle Up or you’ll bog down.

Folks,  we all get ourselves into situations we regret, and of course things befall us that we didn’t bring upon ourselves. We lament both, but if you’re giving yourself a dose of nasty talk instead of a pep talk, your chances for success are greatly diminished.

You are where you are, and whether you’re enjoying the moment or not, it will pass. Do your best in any given situation and Throttle Up instead of bogging down in the mire.

Author Tamela has extensively traveled the U.S. and Canada, delivering her message to Pack Light | Travel Slow | Connect Deep. Her keynotes and workshops include life lessons she has learned through chance encounters on the road.
Previous Guerilla Knitting at the Big Nickel
Next Bug Bits & Petrol Perfume