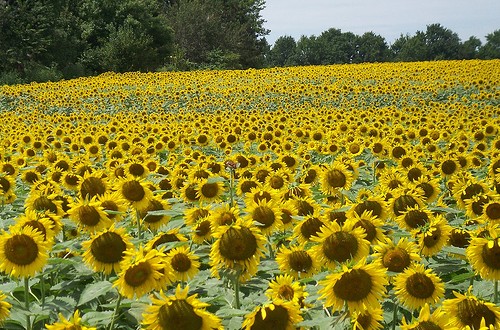 A Throng of Sunflowers facing Mecca

Yesterday I wrote about traveler-maligned Kansas, and the rewards of exploring her history and meeting her people, rather than high-tailing it through the state en route elsewhere.

Even if you’re a high-tailer, when traveling through the state in the summer, you’ll pass through acres of sunflowers. They act as a makeshift compass, since the green side of the flower faces west and yellow side faces east. When I make it to Arles, where Van Gogh painted mutant sunflowers, I’ll let you know how the experience compares.

I thought about those east-facing sunflowers last year as I passed by the the green-roofed Masjid Al-Noor (mosque) near Wichita State University, which is reported to serve 5,000 members. Kansas Muslims turn to the east when they pray. The photo to  the left, a common sight in Kansas, reminds me of a throng of believers praying in unity.

To clarify, all Muslims, face the Qibla, “direction” in Mecca, Saudi Arabia, which happens to be east from Kansas.

I had the great fortune of working with Muslims in an interfaith organization whose board I once chaired. It always pains me to hear those who have never met a single Muslim in person paint them all with a violent brush. After all, most of us know that the Ku Klux Klan isn’t a “Christian organization,” despite what its members claim; the same is true of Islamic extremists.

Today, I’ll be thinking about those acres of sunflowers facing east, as acres of Muslims around the world gather for congregational prayers, know as  Jumu’ah, or  “Friday prayer.” A sacred act performed in unity.

When’s the last time you performed an act voluntary unity with others? For me, it was sun salutations in a yoga class, when the teacher advised us to to draw on the strength of the class when we grew weary. Ah, yes, the strength of unity.

Today as I think of the Muslims in community prayer, I will focus on the shared human experience of being alive on this one planet, circling the same sun, recycling the same air and water. I invite you to do the same. May peace be with us all.

Author Tamela has extensively traveled the U.S. and Canada, delivering her message to Pack Light | Travel Slow | Connect Deep. Her keynotes and workshops include life lessons she has learned through chance encounters on the road.
Previous Kansas and Thoughts on Boredom
Next Tender Lovin’ Care from “Squirrel Man”