Think of the leggy woman in a tiny bikini and investment-grade boobs who usually adorns a bike, then replace her with a paunchy, hairy guy. I love the cheeky role reversal. 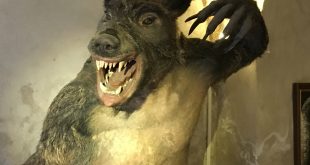 I visited the San Francisco Motorcycle Club (SFMC) when passing through the city on one of my cross-country fundraisers for breast cancer. The moment you read “motorcycle club” your gut probably had a reaction. We’ll circle back to that in a minute.

Members invited me and my fellow Conga riders to tell them about our work, and to pass the hat for our cancer cause. When I pulled up, there were dozens of bikes (all brands and types) parked up on the sidewalk (the sidewalk!) of the club’s Mission District headquarters.  I guess they got a zoning variance for that feat!

Inside a motorcycle club: prepare to be surprised!

Stepping inside, past the library and gear check room, I let my pupils adjust to the dark wood interior. The main gathering area features comfy seating with vintage pictures, pennants, bikes suspended from the ceilings and all manner of bike parts everywhere.

For those of you who equate a motorcycle club to a den of iniquity, prepare to be disabused. SFMC members of various ages and occupations gather to play billiards, foosball or pin ball; to drink to loves lost (human, two-wheeled and otherwise), or to lounge in the comfy couches while recalling their best rides and planning rides to come. Children and babies are welcomed at the annual Christmas party. How’s that jibe with your mental image of a motorcycle club?

Members are proud of their history as the first club to admit women as full members (not auxiliaries). After the business meeting, the club’s president invited me to leaf through a scrapbook of the club’s history. He and a couple of other members boasted that had it not been for the women members, the club would have folded in its infancy over 100 years ago.

Slipping into the bathroom, I was greeted by a mishmash of graffiti, photos and more memorabilia, including a picture of a man draped over a big Harley wearing nothing except a blue Speedo. Think of the leggy woman in a tiny bikini and investment-grade boobs who usually adorns a bike, then replace her with a paunchy, hairy guy. I love the cheeky role reversal.

I learned in college that stereotypes are a kind of mental shorthand, and as such, they’re useful. They can also be wrong headed. We have to keep ourselves mentally sharp to make sure we aren’t falling into the problem zone. I invite you to be aware of that today as you face a host of stereotypes.

Author Tamela has extensively traveled the U.S. and Canada, delivering her message to Pack Light | Travel Slow | Connect Deep. Her keynotes and workshops include life lessons she has learned through chance encounters on the road.
Previous Speeding to Cheyenne
Next Slipping, Sliding and Sticking