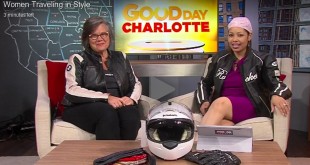 I’m not one to rant, and I hope you won’t take this as such, but I’ve been on the receiving end of some comments that have not been, let’s say, thoughtfully prepared. Perhaps you have too.

When I tell people that I ride a motorcycle, the response is usually:

It seems the art of small talk has been lost on many of us.

When you’re meeting someone in any field of endeavor that’s new to you, what if you said, “Oh, wow, tell me about that.” That’s right, what about leading with an open-ended question? This allows the other person to tell you what they WANT you to know about them.

But just in case you feel compelled to warn motorcyclists about the wrecks you think they’re likely to get into, here’s what you’ll get from me:

YOU: “Let me tell you about the wreck…”and I’ll stop you about right there with a raised hand

ME: “Hold on just a moment if you will. Is there anything about this wreck story that’s going to help me avoid a wreck in the future?”

Most often the answer is “No.” Just like the evening news, people seem to want to lead with what bleeds as a conversation starter. Not a productive start to a relationship eh?

Today, as you meet someone new, or you learn something intriguing about someone, instead of being directive in your conversation, why not trot out the line I’m trying to use more often: “Oh, wow, tell me about that” and see how that works for you.

Author Tamela has extensively traveled the U.S. and Canada, delivering her message to Pack Light | Travel Slow | Connect Deep. Her keynotes and workshops include life lessons she has learned through chance encounters on the road.
Previous Live Like a Shepherd
Next Ode to Duct Tape