Bestselling author Dan Ariely, a professor of behavioral economics at Duke, made a special appearance in Charlotte for our Business School Alliance last week. Ariely's book, Predictably Irrational, just went into a second edition and -- holy cow-- is still in hardcover. I'll write about his visit in this and two other posts this week. Here's what's in the new edition: 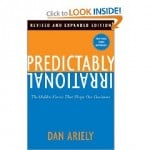 Bestselling author Dan Ariely, a professor of behavioral economics at  Duke, made a special appearance in Charlotte for our Business School Alliance last week. Ariely’s book, Predictably Irrational, just went into a second edition and — holy cow– is still in hardcover. I’ll write about his visit in this and two other posts this week. Here’s what’s in the new edition:

1.  A New Intro: Why the recent events in the economy make behavioral economics more important than ever before

2.  Reactions and Anecdotes: Expanding on some of the lessons we learned in the earlier chapters with interesting new stories and some more science

Part One: we trust and seek revenge irrationally

Cliff’s notes: Ariely demonstrates that people aren’t always “selfish economic maximizers.” We will trust when we are rationally unwise to do so.  He also points out that we are, irrationally, “very happy to spend lots of money to make others suffer,”  joking that if you’ve any experience with divorce you’ll understand what he’s talking about. He explained the social utility of revenge in situations where lawlessness prevails.

Interesting factoid: PET scans of brains plotting revenge are quite similar to those experiencing pleasure.

I particularly like the novel way he approaches financial and healthcare reform.  He reminds us that roads and highways have wider lanes than a vehicle width, they have shoulders where people aren’t supposed to drive, they have protective medians and speed limits — none of which a “rational economist” would allow for.  Conclusion: when we devised our transportation system, we allowed that drivers would need room to make mistakes (or get out of the way of others who do).  We should plan ahead for “mistakes” in financial and healthcare reform efforts as well.

I had the foresight to bring my digital recorder, so enjoy what Dan has to say (click the link to play inside this window or download).

From Charlotte, NC, Tamela writes books, articles, speeches and presentations for business professionals. From "the road" she writes about the people, places and experiences she discovers and the life lessons she learns from them. Invite her to share some of her lessons from the road at your next event!
Previous Jon Stewart and the Gerund
Next Do Your Stats Stack?