The prompt: Wonder. How did you cultivate a sense of wonder in your life this year? 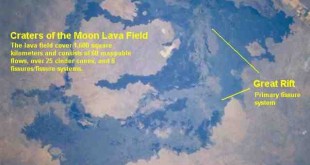 Craters of the Moon

The prompt: Wonder. How did you cultivate a sense of wonder in your life this year?

Sure, I could have driven a car across the country this year.  But doing so on a motorcycle allowed me to participate IN life instead passively observing it.

Everything’s more immediate and real astride a bike,  from which you smell and feel the micro-climates and resonate with the vulnerability of the animals alongside the road. On a bike, you gain perspective on your little life within the whole of creation.

This volcano field  reminds me how minuscule I am in the scheme of things.

The places I explored reminded me that destruction and creativity comprise the one circle of life. I thought about the mountains soaring overhead that were once seabeds and the near fate of Yellowstone as a lava field (it could happen any minute).  Time and again I remarked that I wished I’d paid more attention in Earth Science class.

At 100+ degrees  and with nary a drop of water to be found at Craters of the Moon National Park, I marveled at the ingenuity and resilience of humans who had come across this desolation and eked out an existence.

My religious background explains that there are two books of God: Creation and Revelation.

The first “book” is nature, which expresses the purpose of the unknowable essence as it unfolds in endless patterns in the observable universe. As Bahá’u’lláh stated, “Nature is God’s will and is its expression in and through the contingent world.”

The second “book” is revelation, by which is meant not a static and arbitrary set of doctrines delivered to mankind in finished form, but that progressive and dynamic power, conveyed through the written word, that has transformed human consciousness throughout the ages and which draws individuals out of the narrow confines of their own self-interest into ever-widening circles of regard for others.

Author Tamela has extensively traveled the U.S. and Canada, delivering her message to Pack Light | Travel Slow | Connect Deep. Her keynotes and workshops include life lessons she has learned through chance encounters on the road.
Previous Joining the Reverb10 Movement: Day 3
Next Day 5 of Reverb10: Let Go